Editor, publisher, and I also sweep the place out

After George Bush was elected president, Leon Smith, who used to run the Clifton Courier, decided to start a newspaper in Crawford, titled "The Texas Iconoclast. At the time, I was working at McLennan Community College, and Don Fisher, a friend of both Leon and myself, was running the journalism department there.

Don asked me if I'd take sports photographs for the Crawford football team for the paper. I love football, and was an Art major in college. I was an amateur photographer and had never photographed a sporting event.

So, I said, "SURE," and went out and started taking photographs, even though my cameras and lenses weren't up to the job, and I knew nothing about photography, except as an enthusiast.

The first photos were terrible, but a funny thing happened. Leon used them. He even paid me, occasionally. Very occasionally.

Over the next few years, I got better at photography, and started buying equipment that was up to the task of photographing a team that wears black helmets, jerseys and pants, and plays in a stadium that doesn't have great lights. It was a challenge, but I kept after it.

The first photo I took that got stolen by several papers was of Jad Tawater making the winning catch in the state championship game in 2004. 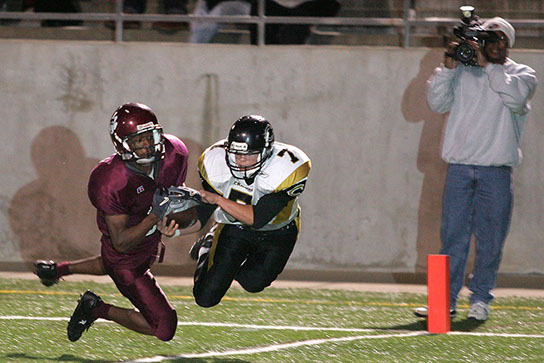 During the 2004 season, a presidential election was also going on, pitting George Bush against John Kerry. Leon Smith was a Democrat, and released his editorial endorsing John Kerry in the Crawford paper prior to running it in the Clifton paper. There was quite a backlash from Crawford, and the paper was no longer sold in town. There were other things going on, but that's the thumbnail version.

In any event, after the season, there wasn't a Crawford newspaper, anymore. The Iconoclast became an on line newspaper, dealing almost exclusively in politics, and I was a photographer without a newspaper.

I called Charles Mooney, over at the McGregor Mirror, and asked him if he'd like to use my work. He graciously accepted, and I've been working with him ever since.

One nice thing about working with Charles is that I keep my own work, and he uses what he needs, but it allows me to post far more photos than if I worked with someone who kept all the rights.

So, a few years later, I got an email from Jake Shaw, who was the managing editor at Texas Football magazine, asking if they could use a photo of Brock Duncan, a Crawford running back. I said "sure," and provided the photo. Later that year, Jake, a Baylor graduate, sent an email inviting me to photograph the Baylor games for Texas Football. This was back when the Bears weren't very good, and getting access was easier.

Texas Football provided me with my first two-page magazine spread, a photo of Colt McCoy flying for a first down.

A few years later, Jake moved to Rivals, and asked if I'd like to work with them. I said, "sure," and moved over to Rivals to work with Jake and Kevin Lonnquist.  Then Jake asks me if I can do video, so I said "sure" and started doing video interviews. Unfortunately, the first ones looked kind of like the first fifteen minutes of Saving Privat Ryan, and sounded like a bootleg music recording in a mosh pit. Rivals ran them, though, and slowly I got better. After that, we started a podcast, and I've been doing the sicemsportscast for over three years.

During this time, Coach Kelm asked me if I could do the Crawford highlight DVD. I'd never done one before, but thought I'd give it a whirl, and have been doing it for five years, now.

Some folks at MCC saw the Crawford and Baylor photos, so now I do the basketball, baseball and softball photos for them, and have been doing some video work.

So, practically everything I do as far as photography goes has it's roots in working with the Crawford Pirates, and many thanks to all the Pirate teams, Coach Delbert Kelm, Coach Robert Murphy, Coach Ronnie Bruce, and all the other coaches, cheerleaders, and those two crazy old newspaper guys, Don and Leon, who got me started.